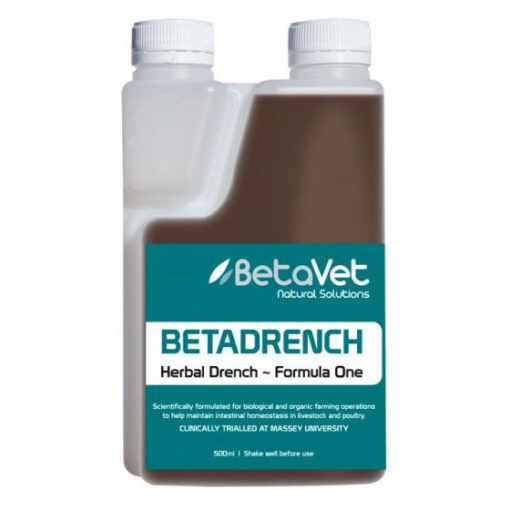 Print this product Email to a friend Add Review

For best results dose 1-3 days as required. A follow-up dose two weeks later for 1-3 days may be advisable for poor condition animals. Alternatively dose every 3-4 weeks as required. BetaDrench can be diluted with water but the active herbal dose levels must be maintained. Nil withholding for meat or eggs produced for human consumption.
Not recommended in early pregnancy
BetaVet’s potent herbal formulation for controlling internal parasites comprises myrrh, wormwood, black walnut hulls and essential clove oil. The bitter-tasting formula is also beneficial for digestion.
TRIALS SHOW BETADRENCH INHIBITS INTERNAL PARASITES
The control of internal parasites without the intervention of synthetic chemicals is a continual challenge for organic producers. Internal parasites reduce live weight gains and are a cause of diarrhoea in growing lambs (Macchi, 2001).
Anthelmintic resistance to synthetic chemicals is increasing (Pomroy, 2006) in conventional animal production systems.
BetaDrench, a blended herbal worming drench, comprises mainly myrrh, which has been determined to be efficacious against internal parasites in lambs.
Oral dosing with myrrh has shown promise in uncontrolled field trials for the treatment of various parasitic infestations in sheep (Haridy et al., 2003; Al-Mathal & Fouad, 2004; Haridy et al., 2004). Myrrh comprises a volatile (essential) oil (2 to 10%) including sesquiterpenes, an alcohol-soluble resin (25 to 40%) containing commiphoric acids and a water-soluble gum (30 to 60%) (Mills & Bone, 2005).
BetaDrench was tested by Massey University in 2009 and 2010 for its efficacy against internal parasites in lambs compared to undrenched cohorts. The contents were approved by the Therapeutic Goods Administration of Australia. All ingredients in the drench are fit for human consumption.
Romney lambs, naturally infected with internal parasites, were divided by body weight into groups of 20 and orally drenched with 0 ml/kg body weight (control) and 0.5 ml/kg body weight on three consecutive days (3 doses). This is in line with herbal anthelmintic usage.
Faecal samples, taken from each lamb 0, 7, 10 and 14 days after treatment, were analysed for faecal egg counts and the first 100 larvae identified to determine the proportions of Haemonchus, Teladorsagia, Trichostrongylus, long-tail (Oesophagostomum or Chabertia) and Nematodirus species. No difference were noted in faecal eggs counts (FEC) on days 0, 7 or 10 post-treatment between the control, 1-dose or 3-dose groups.
At day 14, the 3-dose treatment group had a 52% lower FEC compared to the control. This reduction for the herbal drench represents the highest reduction by a treatment on any day. The drench demonstrated potential for controlling internal parasites in lambs but the response was delayed.
It was noted that the herbal drench appeared to be inhibitive of internal parasites rather than selectively inhibiting species. A delayed response has also been observed from other herbal anthelmintics including fagara leaves (Zanthoxylum zanthoxyloides), which when consumed regularly in small amounts resulted in reduced nematode egg excretion from sheep (Hounzangbe-Adote et al., 2005).
Trial length of 28 days is determined by animal ethics and the strict monitoring of control groups.
Drench protocol
Controlled dosages are given for best analytical result in the clinical environment. Lambs, sheep and goats – which drink significantly less water than larger animals – require direct drenching. Although organic farming practice has strict criteria forbidding routine drenching, BetaDrench can be added to the drinking water of worm-burdened beef stock on days 1-3 and days 14-16. Beef stock like the taste and will drink freely. This emulates traditional grazing practices in Africa where stock are herded to areas where anthelmintic plants thrive.
BetaDrench has been successfully added to the milk of scouring hand-fed calves, and healthy growth in calves means bigger and better heifers.
Resistance factors are unlikely to occur with herbal anthelmintics. Herbs comprise many complex chemicals that combine to create a therapeutic effect, and the kill-ratio expectation is fundamentally different. A reduction of intestinal parasites allows an animal’s own immune system to contribute to control. Organic farming practice, combined with better base animal health, suggests a worm reduction strategy using anthelmintics in young animals is all that is required until the onset of natural resistance.

All our product prices include shipping fees. To calculate and display the correct prices in the shop, please select where you want to have your items delivered to.

Select your prefered display currency. The shown prices will be converted from the currency of the delivery country (at the moment delivery zone New Zealand / NZ$ is selected). Please note that exchange rates change slightly on a daily basis.